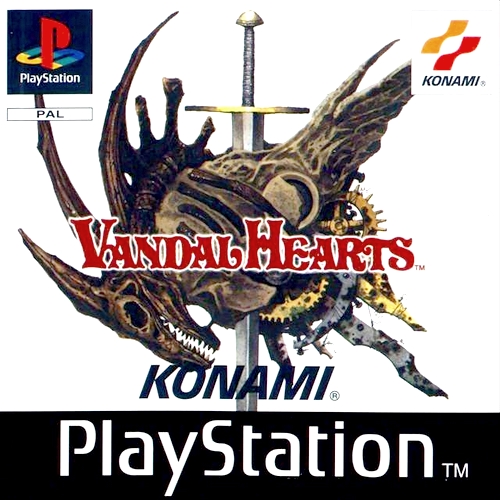 A flagship of the genre on Playstation, Vandal Hearts was also the first incursion of the talented firm Konami (series ISS, Metal Gear, Silent Hill, and so on) in the small world of tactical-RPG. Analysis of an unsuccessful attempt almost ten years later.
The introductory kinematics immediately defines the major themes around which the storyline will be articulated: in the year 1239, the continent of Sostagaria was ruled by the Ashah dynasty for several centuries already. Depravity and corruption, however, became the prerogative of the empire, and a group of citizens, weary of this situation, burst a rebellion led by Arris the Wise; under the aegis of the latter, this band of revolutionaries manages to overthrow the ruling power and its "Royal Army", and sets up a democratic system that will apply to the Republic of Ishtaria, founded for the occasion. However, Arris the Sage disappears mysteriously while he was strongly tipped to lead this Republic ... The adventure itself begins in 1254, on the island of Gillbaris, 15 years after this revolution that will affect more strongly the scenario that it looks like during the first missions. On today's menu then: diplomatic plots, war and witchcraft, all in a medieval setting and against a background of internal rivalry between the hero, Ash Lambert (a member of Ishtaria's security forces), and the chief of an elite army also dependent on the government of Ishtaria. A vast program for a story that is objectively rather well crafted. Unfortunately, too much to focus on the plot, the writers have somewhat obscured the characters who, by their lack of personality and their Manichaean appearance, are flat and unappealing; difficult to be caught up in history.