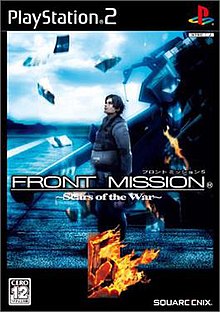 Front Mission 5: Scars of the War is a tactical role-playing game (T-RPG) on PS2. In this new installment of the series, you play as Walter Feng and Lynn Wenright, two officers of the USN. The Wanzers, some kind of giant robots, are always in the game as well as the military-political context in which you will have to lead them to carry out turn-based fights.